Did you know that the gaming industry reaches 1 in 3 people on the planet? For this reason the Playing for the Planet Alliance was launched in 2019 during the UN Secretary General’s Climate Action Summit. The initiative is facilitated by the United Nations Environment Programme (UNEP) and aims to help the gaming industry to reduce its carbon emissions and to support the global environmental agenda through green activations in games. With more than 3 billion gamers playing worldwide, developers have great potential to raise awareness of the devastating effects of climate change.

Pixel Federation became the first Slovak game developer to join the alliance and committed to integrating green activations in its games, reducing emissions and to participating in the Green Game Jam - an annual event bringing together the biggest names in video games across PC, mobile and console to educate and empower millions of players to act for the environment.

This year’s edition featured over 40 participating studios from around the world and focused on food and forests with the goal to shift one million player’s food choices and plant and protect one million trees.
Pixel Federation joined the jam big style with not one but 3 gaming titles - Diggy’s Adventure, TrainStation 2 and Port City and a commitment of planting 10 000 trees.
“Deforestation is a world-wide issue that is getting worse by the year. Pixel Federation has been supporting the local causes to prevent deforestation in the region for several years now through its initiative Pixel green Act. It was just the logical next step for us to scale up the impact globally as our audience is also located all over our planet,” says Petra Adamekova, producer of Trainstation 2.

During the special in-game event, the players were able to purchase unique game content and alongside support various reforestation projects in Africa via our partner Ecologi. By the end of the event, the team at Pixel Federation stood speechless. ”Our players not only hit the goal of planting 10 thousand trees, but totally crushed it with over 86K trees together. We can't thank them enough for that!” says Filip Polasek, Diggy’s Adventure producer. 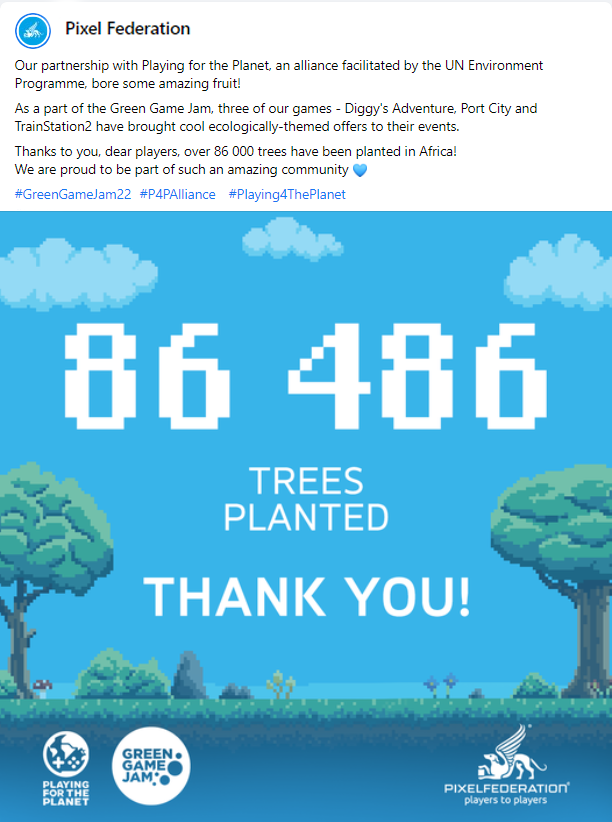 “We were unsure on how our players would react. We hoped for positive reactions, as we believe gamers to be strong in understanding the broader context. Each game community reacted differently. The Diggy’s Adventure community reacted the best. The results of the community contributing to planting more than 86k trees is more than we hoped for.” says Lucia Sickova, CLO of Pixel Federation.
“KPIs wise, we had no benchmark as this was our first activity with direct financial support from players to a cause. But we were definitely pleasantly surprised by the number of trees we were able to plant via our partner, thanks to our players.” adds Petra.

The winners of the third Green Game Jam Awards were unveiled and amongst the winners were Supercell's Hay Day, Ubisoft's Rider's Republic, Tilting Point's Terragenesis and Tencent Games' Carbon Island.

“Congratulations to all the winners! It was really inspiring to meet the community of developers with similar values. We are already looking forward to next year’s edition.” sums up Lucia.