The second year of pandemics brought further turbulence and uncertainty into all aspects of our life including the business environment. Pixel Federation, Slovakia’s biggest game developer with 14 years of experience in publishing and developing games under one roof, proved its skills by navigating through these tough times with scoring many important successes and reaching the highest revenues of 50.9M EUR in their history.
The company with strong focus on niche transport games launched a new mobile title with a maritime theme, Port City, which earned 1M EUR in just 5 months of its existence. The game was inspired by its successful 2 years older sister - TrainStation 2, which achieved a revenues of over 18M EUR, quickly catching up after the Pixel Federation’s flagship title - Diggy’s Adventure with earnings of 20.6M EUR.
The increase in projects was reflected in the need for new employees. Pixel Federation decided to expand beyond the Slovak borders and in summer 2021 the company opened its first foreign branch in neighboring Czechia.

The 2020 pandemics brought unpredictable profit to many companies in the gaming and entertainment business and Pixel Federation managed to maintain the positive trend. After a record 51% revenue increase in 2020, the company reached the total profits of 50.9 M EUR in 2021, and despite not meeting the ambitious sales plan of 53 million, increased its revenues by a further 7%. The gradual development of total annual revenues indicates that the company's feet are firmly on the ground and can deal with unexpected situations. 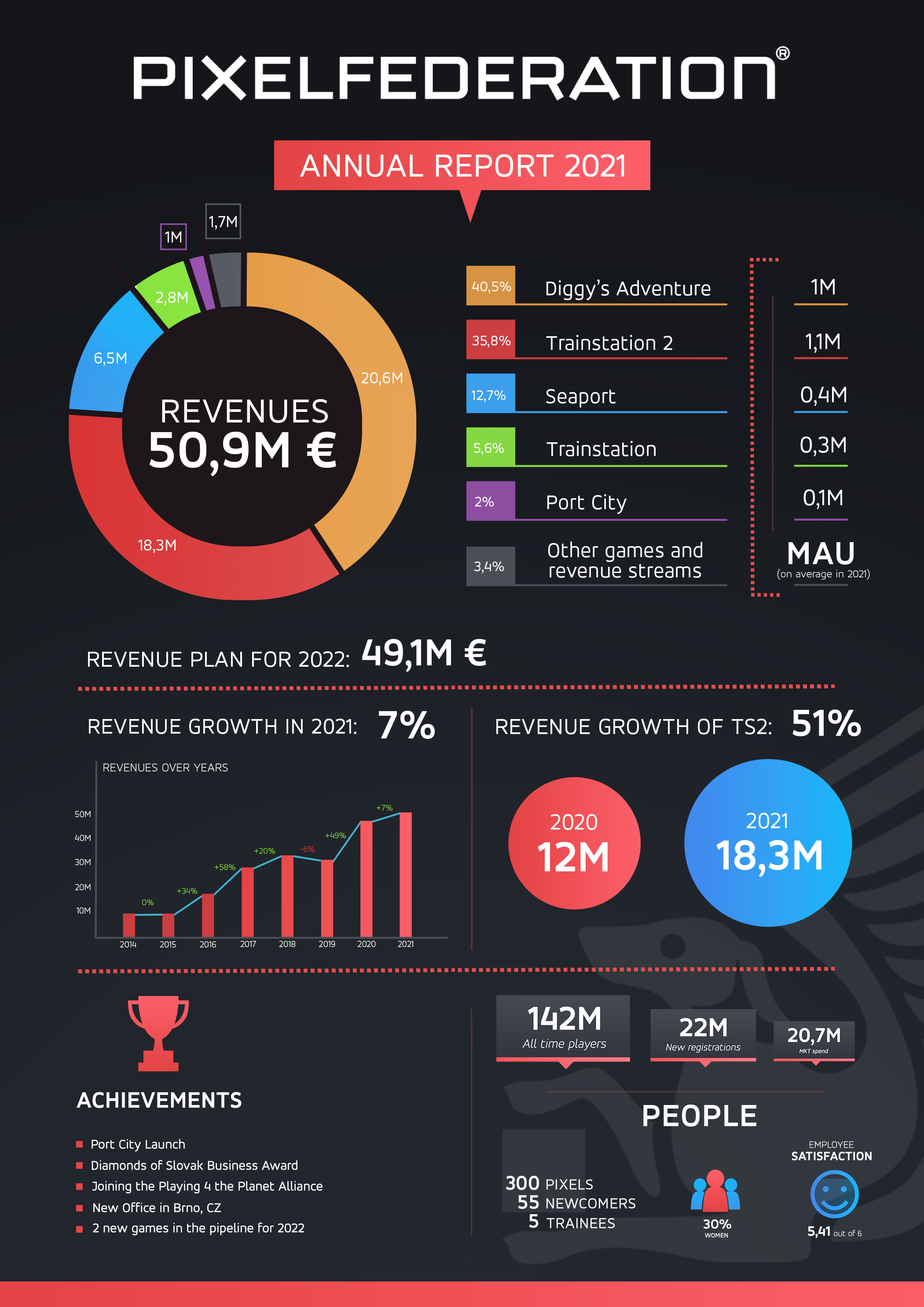 The company owes its financial success to its five main free-to-play titles:

Apart from the 5 titles on the market, with the significant support from the R&D department established in 2020, the company worked hard on development of two new projects - the already mentioned Port City, Puzzle Adventure and a new type of game with a planned launch in Q3 2022.

“Despite major changes in the mobile market in 2021, namely Apple's new privacy policy and increased competition, we have managed to further increase our marketing investment while maintaining profitability.”, says Michal Prokop Grno, Head of Marketing at Pixel Federation.
In 2021, the Marketing team spent over 20M EUR on user acquisition and gained over 22M of new registrations. Thanks to the strengthening the production of marketing creative visuals, improved data analysis and user targeting, the marketing team was able to offer the players tailor-made storytelling and visuals.

As development of new titles underlined the need for new employees, the studio decided to expand and open its first branch abroad in neighboring Brno.
“Brno is the ideal location”, says Daniel Duranka, the COO of Pixel Federation. “It is easily reachable by our current employees to search for new talents and expand our team both culturally and personally. We’re truly excited to see what a move into Brno will bring for Pixel Federation this year and welcome new faces into the family.”
The studio hopes not only to attract the new talents but also to create an independent production team in Brno within the upcoming year. The main focus will be on maintaining a unique corporate culture and creating games in accordance with the motto "Players to Players."
In December 2021, Pixel Federation broadened its CSR activities by joining the Playing for the Planet alliance", led by the United Nations Environment Program (UNEP). The Slovak game developer has joined the world famous gaming studios in the fight against the climate crisis and is committed to measuring its carbon footprint, supporting the young generation in finding innovative solutions to the climate crisis and encouraging its players in environmental behavior and real life.
In autumn 2021 Pixel Federation was honored for the fourth time in its history by the title Diamond of Slovak Business, award destined to healthy growing businesses in Slovakia.
Nevertheless, the greatest achievement for Pixel Federation is the continuous creation of new successful titles. In August 2021, it entered the global market with the aforementioned Port City, while dedicated teams worked hard on two new titles scheduled for launch in 2022. Puzzle Adventure is now available on iOS and Google Play and another project is currently in production

The company expanded both in number of projects as in number of employees. Pixel Federation has currently about 300 game enthusiasts on board, of which 30% employees are female. The management hopes that despite the usual predominance of men in the IT sector, this ratio will gradually level out in the near future.
The company managed to maintain overall employee satisfaction level despite the difficult pandemic situation. This is proved by the results of the company's annual LikeIt survey, with overall employee satisfaction scored 5.41 out of 6, which is historically the second best result since 2018.